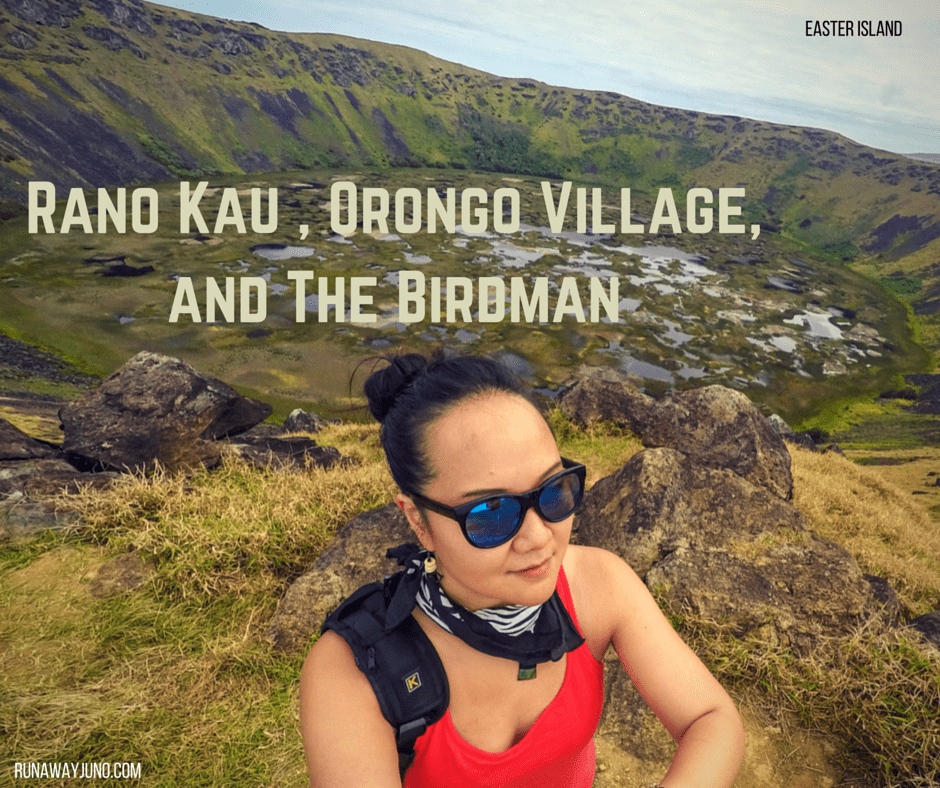 “Close your eyes and grab my shoulder.”

Said David, our guide. But we’re hiking off-road here. “You’re not going to let me fall, are you? The trail is kind of rocky.” I knew he wouldn’t but it was more for telling myself to calm down. “Trust me, I won’t let you fall.” he assured.

I closed my eyes and let him lead the way. ‘I’m in good hands.’ I thought to myself. We walked about a few meters, and he said “Now, open your eyes.” As I slowly opened my eyes, I wished if I had eyes like fish. Apparently, we finally reached the summit.

Rano Kau is a volcano in the western tip of the island. You can see the Birdman islands on the left. (Click the photo to see the full size!)

Easter Island is not all about moai statues, even though it’s a pretty good reason why we love this place. We hiked to Rano Kau on the first day in Rapa Nui. It’s the hike that provides the most dramatic scenery.  If you ever saw an areal view of the island, Rano Kau is the noticeable big crater in the southwestern tip. This 324m volcano was the perfect way to start our five-day long adventure here.

The hike starts at Ahu Vinapu, an archaeological site that features old and new style of ahus (platforms). One distinctive feature here is the stonework. As I visited Inca ruins recently, I recognized the style right away. How did the stone work of Incas cross the ocean?

The trail continued uphill to the summit of Rano Kau. We walked along the coast, ocean to the left. The typical landscape of Easter Island is somewhat different than what I expected of a Polynesian island. Here, rounded extinct volcanoes covered in green and yellow have low vegetation like grasses, rather than palm trees and coconuts. We saw broken moai faces along the way. It was a cool and cloudy morning, a perfect day for a long hike. Walking seems like the best way to feel the island and the spirits. The ceremonial center of Vinapu includes one of the larger ahu on Rapa Nui. Explorer Thor Heyerdahl believed that the accurately fitted stonework showed contact with Peru. The ceremonial center of Vinapu includes one of the larger ahu on Rapa Nui. Heyerdahl believed that the accurately fitted stonework showed contact with Peru. Face of the moai statue in Vinapu to Rano Kau trail

We finally reached the top after a couple hours of steady uphill hiking. To be honest, we spent a big chunk of time photographing. We looked down into the crater lake with awe. ‘How can it look so perfect?’ I thought to myself. The rugged edge, vegetation on the surface of the lake, and blue ocean beyond with absolutely nothing to be seen on the horizon gave a mysterious feeling to the whole scene. We were standing on the top of a volcano on the furthest inhabited island on earth.

“How long do you think it will take to hike around the crater late, if you go down near the water?” our guide Tavi asked. “Like an hour, or hour and a half?” we guessed. He said it took him 9 hours and he couldn’t finish it. The crater was much, much larger than it appeared to be. Nature tricks us time to time! We continued walking around rim of the crater. The angle of the view changed every step of the way, and we took it all in. The trail lead us to Orongo Village, a ceremonial center for the famous Bird Man cult. The Tangata manu, more commonly known as the bird-man cult was the competition to select the winner. The rule was simple; the first person to collect the first sooty tern egg of the season from Motu Nui is the winner. The person had to swim back to Easter Island and climb the cliff of Rano Kau of the village of Orongo. It was believed as religion until the Christian era in 1860s. There are detailed interpretive signs in the Visitor Center of Orongo. A lot of participants had been killed during the competition due to the high waves, shark attacks, and while climbing the steep volcano. It’s not hard to imagine after looking at the terrain here. There are rocks with petroglyphs at the edge of the village that show bird man and the deity make-make. It’s amazing to think the dedication of the people for their belief.

We sat in the village for a while. Birds chirping, waves crashing, wind blowing, and mana was everywhere. There are moments when I wish for a time-machine, because I want to see what really happened here. This was one of those times. I could almost picture the participants swimming across the ocean to collect the egg, with a small basket on their heads. Who’s going to win? How do they climb the hill without any gear? What do they do with the new bird man? So many questions.

Hiking to see the grand scenery and learning the cultural background; it was the perfect first day on Easter Island.

Orongo is a stone village and ceremonial centre at the southwestern tip of Rapa Nui. The traditional house which is low, sod-covered, windowless, round-walled buildings with even lower doors were used by the Birdman cult participants. Orongo was the centre of a birdman cult Petroglyph showing at the edge of the village Motu Nui was an essential location for the Tangata manu (“Bird Man”) cult which was the island religion between the moai era and the Christian era.

#As a delegate of Adventure Travel World Summit 2015 Chile, I was a guest of explora Rapa Nui and Chile Tourism. All of the images and opinions are strictly my own. Hiking Rano Kau with Explora guides – get your island on!