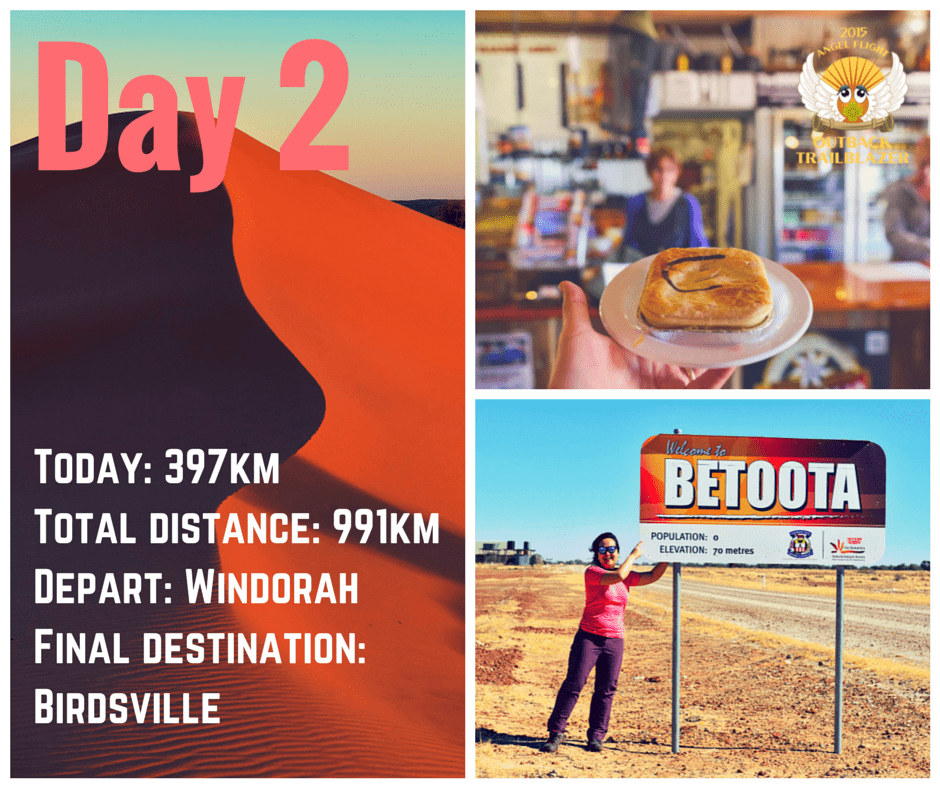 I was a caterpillar in a cocoon. The zipper of the swag zips all the way around as if your sheet is attached to the mattress. I saw the setting Milky Way through my screen at 5am then squirmed inside before finally unzipping myself out. I’m in love with my swag. But poor Stephen had to knock on my screen in the morning because he got so cold. Shortly after we realized a single swag was way too small for two people. For those of who get easily cold, an extra sleeping bag would be a good idea.

Early breakfast at 6am, and off we go.

Today we are heading to iconic Birdsville. Everyone’s been speaking about Birdsville and how characteristic it is. You haven’t done the Outback right if you haven’t been there. It’s that important.

As soon as we get out of Windorah, the world suddenly changes: big plains, fewer trees, sand hills, Mitchell grass, red soil, and gibber rock road instead of bitumen. Every time we cross a sand hill crest the landscape presents itself. We are entering the Diamantina Shire, the Channel Country. It’s one of the largest shires in the country, lying between the Simpson Desert and grazing land. The landscape here is unique, during both drought and flood. The crazy thing is, the shire covers 95,000 square kilometers yet is a home to only 11 stations (farms/ranches) and 300 residents. It will take hours to drive across one property. The scales of numbers are just different out here.

Our other teammate Sophie is driving today. She’s from Quilpie Shire, and now based in Quilpie town. We asked her all sorts of questions about growing up on a station, and living in a remote outback town. We probably didn’t stop talking for hours. Prepare your camera! The 360 degrees of spectacular view of the channel country is here! Be careful – your hat might fly away!

We drive up to the raised land for smoko and a great view. (Smoko means afternoon tea. It derived from when people used to take cigarette and tea breaks on stations.) At Deon’s Lookout, you can truly see the  ‘Channel Country’. The lookout is named after a young man named Deon Brook, who was tragically killed in a helicopter accident in 1996.

Now deserted, it was once a busy meeting point for the drovers moving their cattle through South Australia, and served as a Cobb & Co.’s change station. The Ghost Town comes alive during the Betoota Races on the last Saturday in August.

Don’t miss the photogenic yellow double-decker bus in the back. Dreamtime Serpent: Snake alive! It’s a work of art representing a series of pathways traveled through Country to connect the river systems in the Channel Country of the Diamantina Shire. The Serpent has been created using gravel and gibbers found throughout the shire. It’s a big snake; you can’t miss it.

Snake alive! It’s a work of art representing a series of pathways traveling through the country to connect the river systems in the Channel Country of the Diamantina Shire. The Serpent has been created using gravel and gibbers found throughout the shire. It’s a big snake; you can’t miss it. Our home for the next two days: Birdsville. Finally we meet. Australia’s “must visit” town, Birdsville is the heart of Outback Queensland. But first things first: lunch at Birdsville Bakery. I’ve heard it’s another ‘must’.

Among the various items on the menu, the most famous one is none other than the curried camel pie. Approved by the Great Aussie Pie competition, the taste of curried camel pie is something that you won’t forget for a long time. I’m still thinking about it.

After having curried camel, lamb shank, and kangaroo pies (we shared, really!), while checking our phones, we finally set up our camp at the caravan park near the Pelican Point. Again, it means just laying our swags under the tree.

This evening we are visiting the majestic “Big Red”. Deserts are one of my favorite places to visit and photograph. There’s just something special about them. Big Red are 30-meter high red color sand dunes that are the starting point of the Simpson Desert, which is the world’s largest sand dune desert and contains the world’s longest parallel sand dunes.

We hitch a ride with Smitty, the heart and soul of Outback Aussie Tours. He’s a certified Savannah Guide, which means he knows just about everything around the Outback. Smitty can talk about everything for hours, including dirt and rock. Today’s tour guide is Kylie Scott of Desert Edge Tours.

Sunset at the big red

Big Red deserves its name. It’s not as big as other sand dunes I’ve been to in the Middle East or Africa, but it’s only the entrance of the vast desert. We arrived there just before the sun started to set. It’s a good place to test your vehicle and driving skill up sand dunes. Only 4WD vehicles are allowed!

On the top of the sand dunes, you see another sand dune that’s parallel to Big Red, and that’s just merely the beginning of the longest parallel sand dunes in the world. The Trailblazer organizers prepared chilled bottled of champagne to celebrate this fine moment. They certainly know how to have fun. I’m too busy taking photos… but I feel the joy of bubblies afar.

As soon as the sun hit the horizon we start heading down. We wouldn’t want to get stuck in the desert after sun down. There have been lots of expeditioners who’ve been trying to cross the Simpson Desert, and I will just say some are not children’s books material.

And then the magical thing happens. We turned around from the sunset and started heading down. Then, the sky slowly shoots pink, gray, and blue rays of lights. It’s probably the prettiest eastern sky during the sunset I’ve ever seen.

Characteristic sunset scene in the east sky in the Outback

Tonight’s dinner is with the Angel Flight pilots – on the tarmac of the Birdsville Airport. When would I ever have a dinner on the airport? Angel Flight is a non-profit organization that provides air transport for medical treatment for people in rural Outback, free of charge. Their stories are pretty amazing. The world is a better place when we are helping each other.

Tomorrow will be another big day in Birdsville. I squirm into my swag for another good night sleep under the stars.