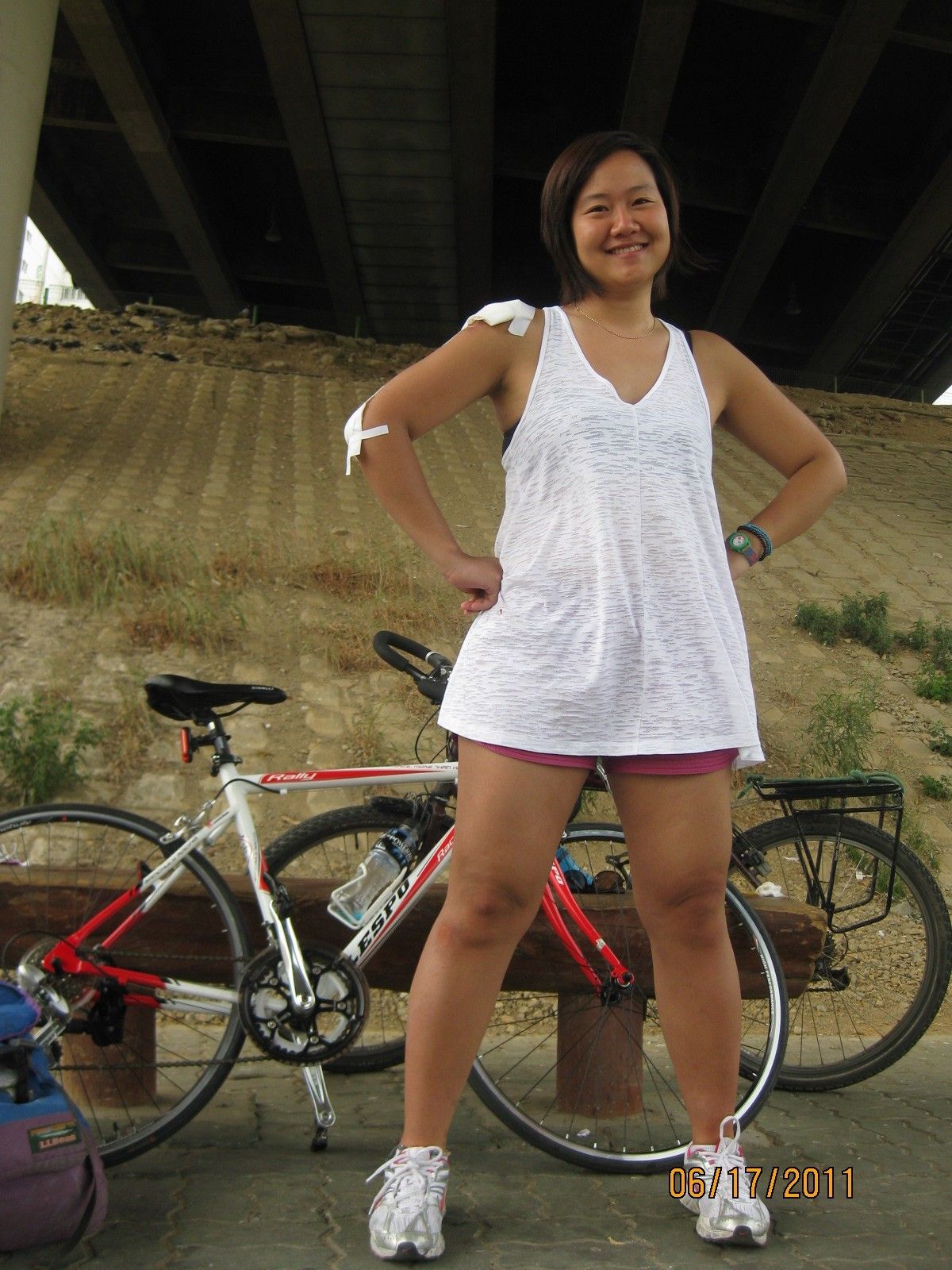 At this very moment, I have three huge first aid-up wounds around my shoulder and leg, and one purple coloured thumb. It looked almost I’ve half eaten by a bear. I am supposed to be at Cheongpyeong with a bunch of bikers, drinking beer but I’m sitting at a cafe, writing this.

What happened was, I went to a bike trip with a bunch of bikers this weekend. Our plan was bike up to the upstream Han river and meet up at Cheongpyeong, Gyeonggi province. The whole ride is 80km. I’ve never done that long bike ride before, but I wanted to challenge it. Nice early summer weather, along the beautiful river and a group of fun people, what’s not to like, right? So I hopped on a bike at 8am, this Saturday. It’s been quite a while since I was on a bike. It took some time to get used to it but after all, “just like a ride a bike” is all true.

I was extremely nervous before I started this expedition. I thought about, why.

I was nervous, why? Because I haven’t done something like this before. Okay, that’s understandable. And nervous because I would be suck at it. But, I’ve never done this before, that means I’m going to be suck and that’s okay. But I will be embarrassed, and why is that? Because I may look like an idiot.

Along the whole process of thinking, I thought, we cannot be good at everything. That’s not a human. We cannot be the best at everything we do. But the nervous feeling and embarrassment stop us to actually do something. Because we do not want to be mediocre, seriously. As became a grown up, we have this traumatized part of the brain says ‘You have to be the best’. That’s a part of a general education of this world. We have to be good at, no, be the best. If not? We stop trying, because we don’t want to feel and to be seen that we suck. And we stop trying because we don’t want to be a quitter. That is really a negative word to use for person.

However, who cares? Even if I’m going to be suck at biking, who would judge me and says, “Hey, you really are suck at it.” And so what? if somebody says that. The important thing is what You think about yourself. Do you really think that you suck? Do you really think that you should stop trying because you are not going to be the best anyways? Do I should’ve declined the offer because I was nervous, and miss out everything? After about 10-something K after, I fell, massively. I landed on the ground with my left palm, right shoulder and right elbow. I was rolling and felt that my shoulder and elbow were peeling off by the ground. Did it hurt? Of course. At that moment, my body hurt for sure, but I felt a serious embarrassment. I couldn’t believe I fell that badly. As I was falling down, I leaned on Katie and she fell too. I felt so bad. My ego hurts more than burns on my skin. I hurt myself and I made my friend fell.

I have pretty positive attitude about pretty much everything. I always am confident about everything I do. But I thought while I was lying on the ground, maybe that’s because I do what I’m good at. To be honest I don’t do well with embarrassment. I don’t know what’s that about, but that is truth about me.

At that moment, I had two choices. A) Bike back to where I started and just call it a day, or B) give myself another chance on the bike. I didn’t want to push me too hard but I was already there, so I’ve decided to give it another try. On a bike and for the first time, I realized that breeze could actually physically hurt me.

For a while later, we stopped for a toilet / water break.  From that spot, six more kilometers, than I got to see the top of Han River. However, I decided to call it a day. I was mentally tired, rather than physically.

You know what? I’ve realized that it takes courage to call it a day. It is important to know that where your limit is. We always want to be the strong one. It takes a lot of courage to admit that we need some help. As a traveler, I consider myself as a super independent, brave and tough human being. So that makes harder for me to admit that I need some comfort in my life. Part of my brain says ‘What are you doing? You are an independent person. You don’t need help! You ain’t no softy!’ But actually I am. Just I was too coward to admit it.

That moment, I swallow my pride and admitted that my wounds were too painful to ride all the way. I admitted that I was mentally tired. I felt sorry for my ride buddy Katie, but I saw my limit there.

It takes courage to admit that you are done for the day.

But it’s okay. It doesn’t mean that you are a quitter. You are just being true to yourself and seizing the moment. We set the boundary, not anybody else. You don’t have to proof to the entire world that you are the best. It is your world. Set your boundary that you can be happy in it. That is a brave thing to do.

That is a lesson for the day, with massive wounds. Even though I have huge bandages all over my body, I am happy that I took that chance today. It was really nice day to out there, and the upstream Han river was beautiful. We had so much fun during all that time, and we met some nice people on the way too. Experience, that counts. Clean up nicely, with millions of bandages

*Special thanks to Katie Tibbetts, who let me run with her the most awesome bike in the world and ride along on my side.