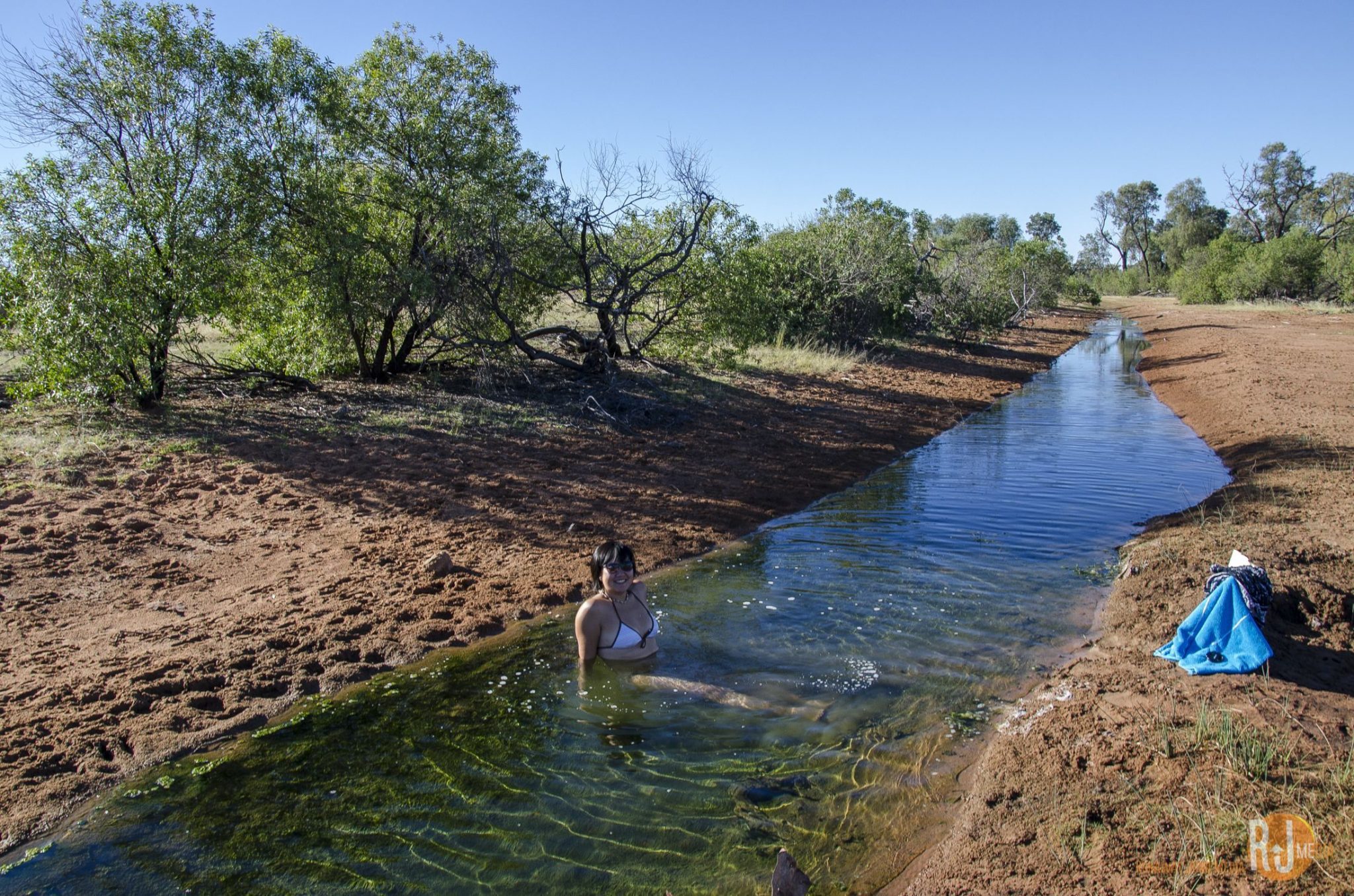 There was a double-headed water pipe in the middle of the farm in Charlotte Plains. A couple bathtubs were on the side of the small lake that looked naturally formed. The water was pumping from the pipe so hard, like someone had turned on the shower full blast. This is the legacy of Artesian Basin bore, that was successfully drilled at the Great Artesian Basin in 1892.

The Great Artesian Basin is the reason why current Australia exists. It is the size of a quarter of the continent, and has been an important key to the life in Australia. It covers most of Queensland, and parts of the Northern Territory, South Australia, and New South Wales. Without this Artesian Basin, life in the outback as we know it would be very different.

The Great Artesian Basin is basically rain from two million years ago that’s now bubbling up from the natural dip. Over the next 140 million years, huge events like ice ages in Europe and tectonic plate movements caused the ocean level to rise and fall. When the ocean levels rose, water became trapped in that natural dip and formed a sea. But when the ocean levels fell, the whole area became land again. When the seas drained away they left clay and silt deposits behind, which hardened into impermeable stone. The continent is now back to dry land, but it’s not desert yet, and there are rivers. The rivers carried sand and gravel with them, which later form sandstone, permeable stone, which is the key to how the Basin works. The water is trapped between the permeable stone on the top and impermeable stone on the bottom. If you drill deep enough to reach the aquifer, the pressure of the water forces it to flow without pumping. That’s how people use this Artesian bore.

“Once people started drilling into the Great Artesian Basin, life in inland Australia changed for good. They called this The Artesian Age, and everyone felt invincible, as if they could finally conquer the outback. Industries that had struggled now thrived. The early settlers used bore water to run steam trains, finally making it possible to travel through the desert in relative speed and safety. Farmers sunk bores on their properties to help fight drought and make life on the stock routes easier.”
– Water Down Under: The Great Artesian Basin Story

Indigenous people discovered the miraculous water a long long time ago. For 20,000 years they lived near the water constantly. This wetland area was crucial for getting fresh water and was a valuable food source. Because of the water, plants and trees grew nearby which people used as food, medicine and building material for shelter. Water in the desert feels like a pretty powerful magic, and the wetland spring areas became spiritual centers for the Indigenous people.

There are more peculiar things about this water. It contains multivitamins, and the temperature, that ranges between 30–100 °C (86–212 °F), is perfect for the soak. Don’t worry, most of the hot pools are cooled enough for us to feel comfortable. The Great Artesian Basin provides not only fresh water necessary for life, but also health and relaxation. People come from all over the world to soak in these hot mineral baths. That’s the 43°C water I dipped my body in at Charlotte Plains.

As I looked at the pouring water, I wondered, ‘Is this ever going to dry out?’ If this water source dries up, the outback will be a totally different place without much life. Mines, farming, and the tourism industry would be forever changed. With some research, I found out that many of the bores are already dried out. Simply stopped flowing. The Great Artesian Basin Coordinating Committee (GABCC) has been working on the problem for the last several years. They encourage people to cap and pipe the bores. It logically makes sense. There’s no reason for the water to flow night and day without control. With this simple change, we can restore the water pressure in the Basin and use it more economically. It costs quite a bit to cap and pipe all those bores, but the expense is being shared by both landowners and the State and Federal Governments.

The journey of learning about the Great Artesian Basin was like watching a movie. It was educational, spiritual, scientific, and humbling. Stories and facts like this always make me wonder about the power of this planet. One of the harshest and most arid places on earth turned out to be sitting on the biggest water basin in the world, one that was formed 140 million years ago. Indigenous people learned and cherished this sacred water source for 20,000 years. Modern generations found out about this and it is now starting to dry up and lose pressure. But now we are finally on track and thinking ahead. What a drama!

After the Artesian bore bath, my skin was smooth as ever. Dipping in the hot pool in the middle of the desert was certainly magical. I felt grateful for the 140 million years of history in this land, and pioneers who successfully tapped the Basin. I’m also glad to hear that we are using good use of our technology to save this wonderful natural resource.

See, how could I not love the outback?