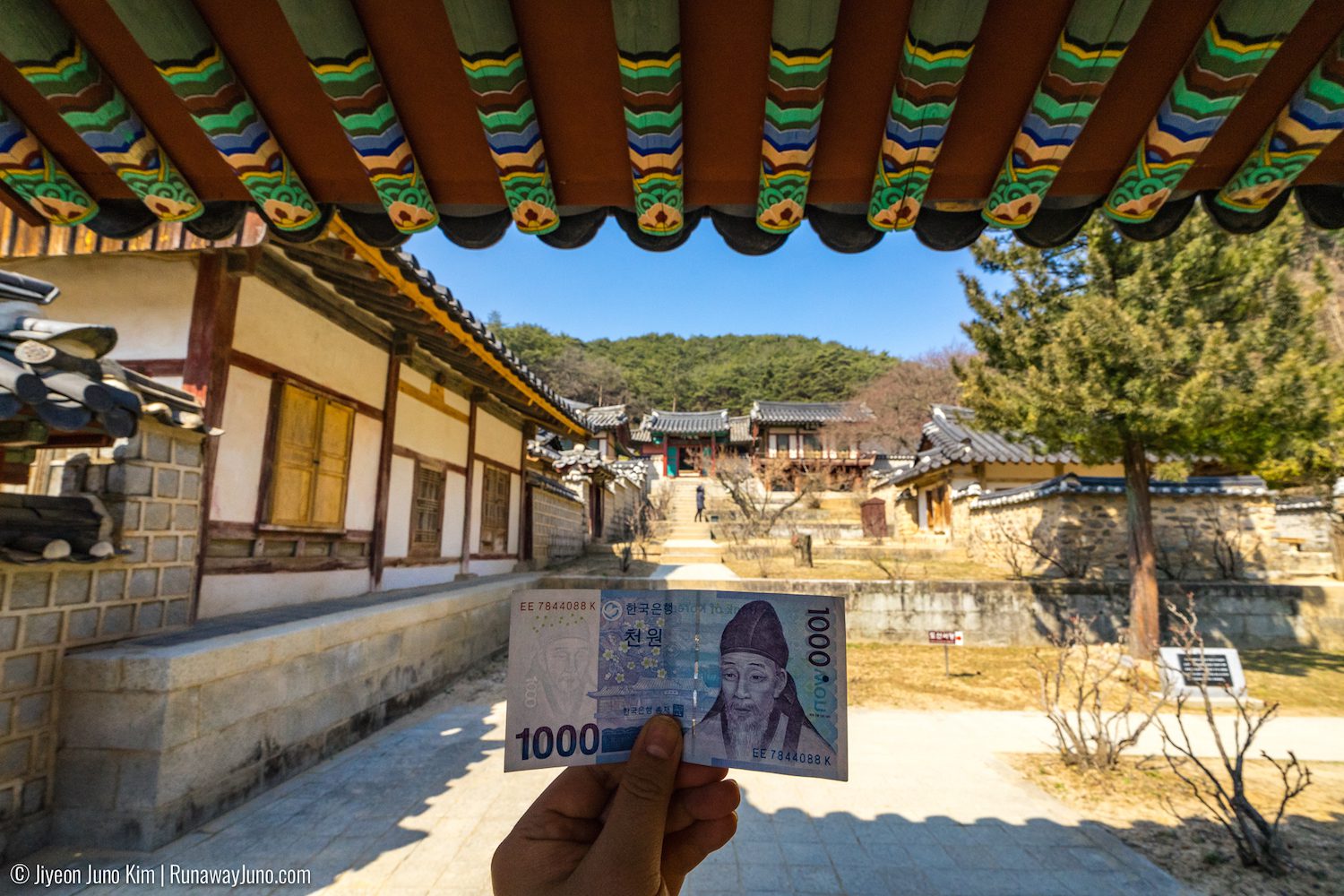 Do you know who is the person on the 1000 banknote of Korean won? That’s Teogye Yi Hwang.

Toegye Yi Hwang (퇴계 이황) is a name that cannot be forgotten by most Koreans. We remember him from our vigorous school studies. He was an important Confucian scholar and he is the person on our 1000 won banknote. He is related to the famous historic site, Dosan Seowon in Andong City. Everyone knows this much. But what did he really do and why he is important in Korea’s history? I’m sure we all learned this at school but let’s learn once again.

Stephen and I traveled to Andong city, about 3 hours from Seoul, for a short trip. I’ve never been there but I’ve always wanted to see the Hahoe Folk Village and Dosan Seowon. After spending the night at the UNESCO Heritage Site of Hahoe Folk Village, we headed to Dosan Seowon to learn more about Korea’s deep relationship with Confucianism.

Who is Toegye Yi Hwang?

Yi Hwang (1501 – 1570) is one of the most prominent Confucian scholars of the Joseon Dynasty of Korea. Toegye is his pen name. He was born in Andong as the youngest son of eight children. He passed the civil service exams with the top honors in 1534 and continued his studies while working for the King. He was also appointed various important positions including the secret royal inspector (암행어사). Toegye also wrote many important books on Confucianism and was talented in calligraphy and poetry.

Dosan Seowon was established in 1574 after Yi Hwang’s death, in memory of Toegye and his work. He had retired to this location in 1549 and begun building a Korean Confucian academy, Dosan Seodang. Yi Hwang believed a modest living and you can feel it by walking around the complex. It’s also the best location according to feng shui, situated along the mountains and water. I felt calm and comfortable walking around, as I was walking with the spirit of Yi Hwang.

The complex of Dosan Seowon has many buildings, some of which existed when Toegye resided here but most of them were built after his death. There is the library, modern museum building, publishing center, living quarters, a dormitory for students, and Jeongyodang, the main hall. Many of the buildings here are recognized as a National Treasure of Korea. The academy serves two purposes: education and commemoration. 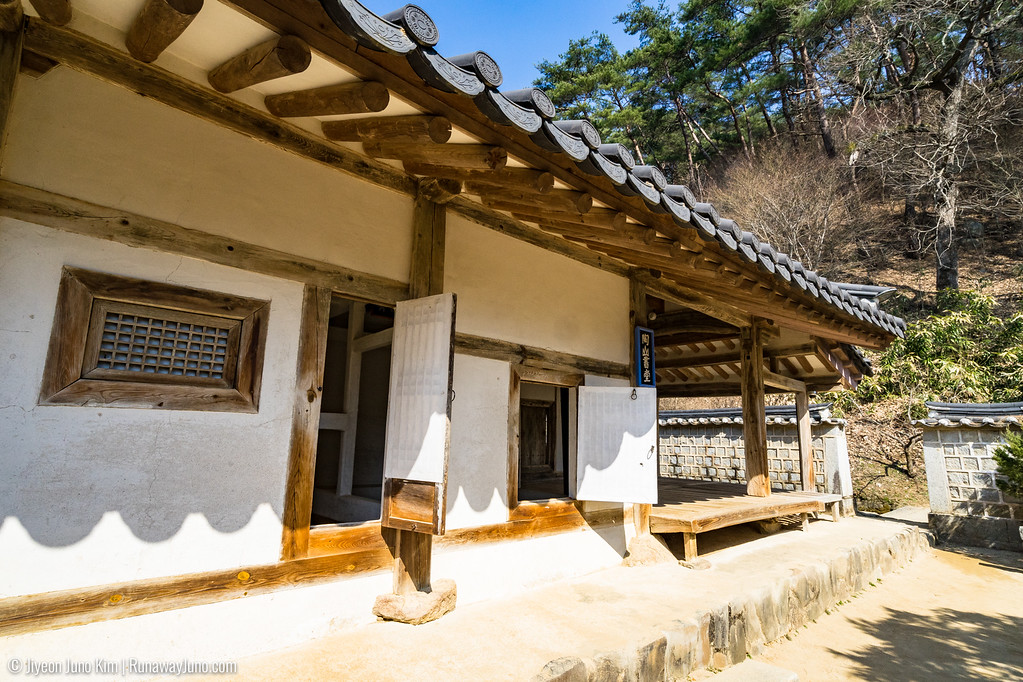 Dosan Seodang is a lecture hall where Yi Hwang lived and taught. It took him four years to complete this building due to his lack of money. There is a small wooden tablet reading “Dosan Seowon” (in Chinese), that Toegye wrote himself. The building is composed of three parts: an exposed floor, a large room, and a kitchen. The room for teaching his followers through meditation was called Wanrakjae, meaning that “I can spend my whole life here for the appreciation that I am enjoying”. The exposed wooden floor was named Amseohun, representing the modesty of “the hope to learn even when you lean on rocks because of your lack of confidence in studies.” 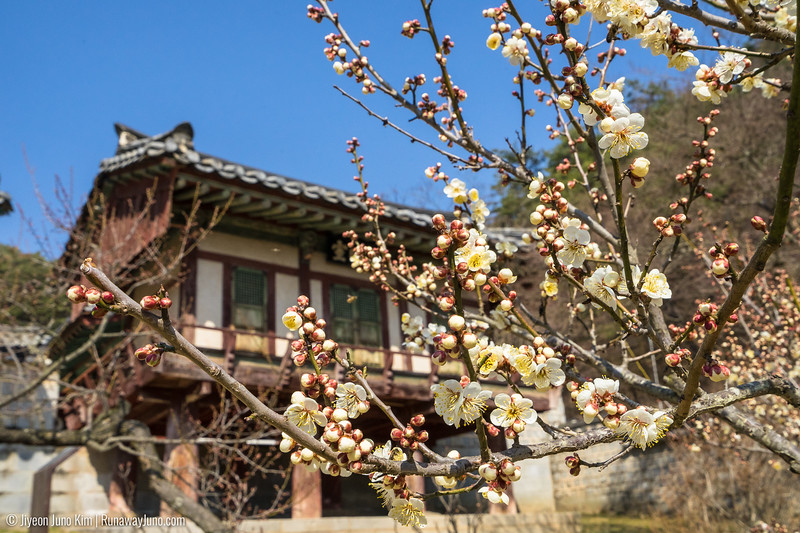 Toegye dug a small pond (Jeongudang) to raise lotus flowers and planted plum trees (maehwa, 매화) in the small garden. He called those trees as his friend and companion. Especially his love of the plum trees is well known (that’s why you can see the plum tree flowers on our 1000 bank note!) He even used respectable language to the maehwa trees, calling them brothers, teachers, and friends.

This trip made me want to learn more about Confucianism. Korea is one of the countries that was most influenced by Confucianism. It influenced the basic way of life. Our ceremony during the Lunar New Year and Chuseok is also from this tradition. Confucianism teaches the belief that human beings are fundamentally good, teachable, improvable, and perfectible through personal and communal endeavor especially self-cultivation and self-creation. Confucian thought focuses on the cultivation of virtue and maintenance of ethics. This philosophy is so vast, it would take one’s lifetime to understand the teaching. Visiting Dosan Seowon was a good place to start.

See more information about Dosan Seowon from their website.

Dosan Seowon is 25km away from Andong city. The best and cheapest way to get there is using the local bus no. 67 which takes about 50 minutes but only costs 1200 won. It departs in front of Andong Train Station. The bus only goes five times a day, plan accordingly. Make sure to be at the bus station at least 10-15 minutes early. But watch where you get off. There’s a station called “Dosan Seowon ipgu (entrance)” but that’s actually 15-20 minutes walk away from the actual entrance. The next station “Dosan Seowon” is the actual entrance. Take the bus back to Andong from the same location. It’s an easy drive if you are traveling by car.

A very unique looking structure was built to commemorate the testing place for the civil service examination in Young-nam region during Joseon Dynasty. It’s seen across the reservoir from Dosan Seowon. In 1792 (King Jungjo year 16), the King opened a funeral rite for Toegye, whom the King had a high regard for, in order to praise Toegye’s scholastic attainments and virtue. It was rebuilt in 1824 (King Seonjo year 24) and was moved 10m above the current location by erecting an embankment due to the Andong dam construction in 1974. 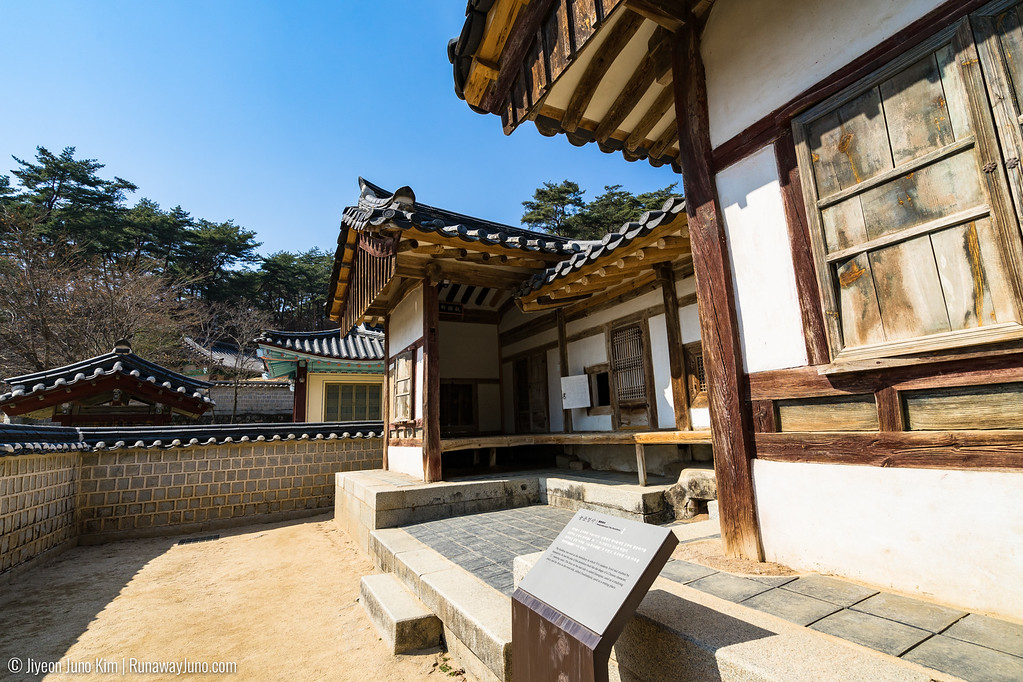 Nongwoonjungsa is the dormitory for students, located on the west side of the village school. Toegye designed the basic layout, in a ‘工’ shape (a Chinese character meaning ‘work’) representing the master’s mentality that hoped his followers to voluntarily focus on body and spirit discipline. This dormitory accommodated two rooms; older followers used the eastern room and younger followers stayed in the western room. Windows were implemented on four-sides of the room, making the lighting and ventilation system more effective.

A square-shaped stone water well called ‘yeoljung’. It was used as drinking water for a long time and the water is pure and delicious. It was scholar’s water for purifying their spirit. This is giving a lesson to ‘become a person necessary for the society like a water well, which all people can enjoy infinite well of knowledge accumulated with your own effort and personality. Water well neither can be moved even if the village moves, nor diminishes when the water is drawn, enabling everyone to enjoy drinking the water.’ 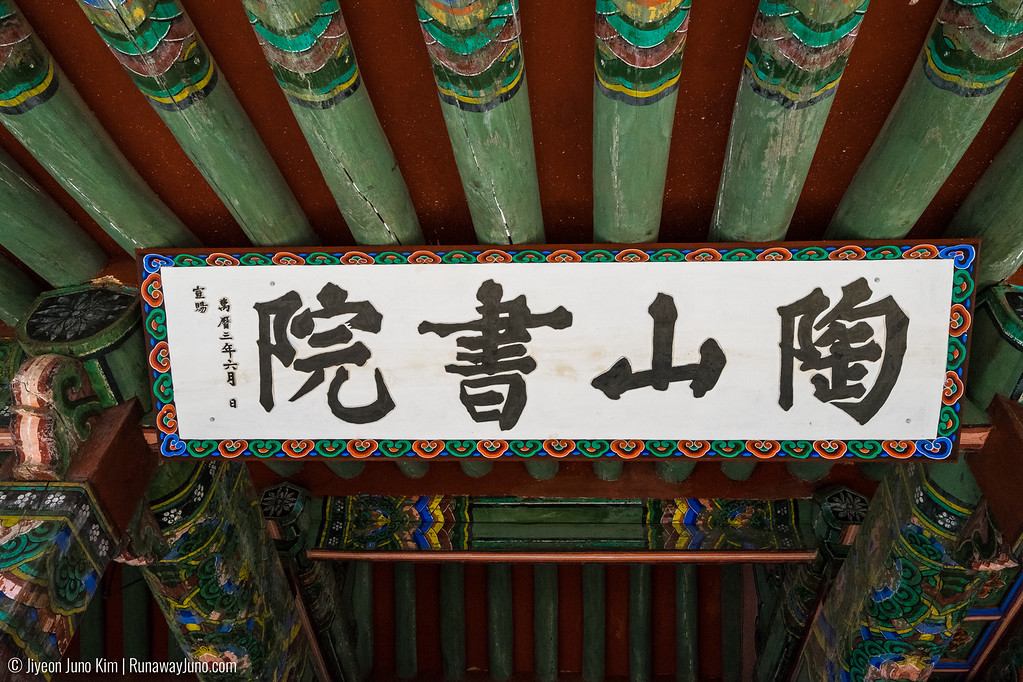 Jeongyodang, sitting on the top of the complex, is the main lecture hall that consists a lecture hall and a principal room. The ondol room (heated floor) is used for the principal’s living room, named “Hanjonjae”. The current figure was remodeled from the original of 1574 into a new one in 1969. Look closely at the nameplate of Jeongyodang. It was written by Han Seok-bong, a leading calligrapher in Joseon period. He composed calligraphy for the royal court of Korea. He was a master calligrapher and a primary transcriber for the King of Joseon. His talent was widely recognized, even by China.

Wangmyungsil is the library. The nameplate was written by Toegye himself. Divided into east and west centering Jindomun on it, it was built with the tall building method to protect from humidity damage. A two-story pattern performed the role of an observatory. The libraries had 1271 kinds of 4917 books and it is famous for ancient books and original copies. Now the materials are left in charge of “Korean Studies Advancement Center”.

Jangpangak is a publishing house situated in the east of Jeongyodang, the main lecture hall. Each side wall is made of wood panel and the floor is checkered to prevent moisture damage. It has space between the floor and ground and the window helps with ventilation. Originally over 2790 woodcuts including autographs, memoirs, Dosansipyigok, Seonjoeopil, books on strategies were kept here, but for a systematic classification and safe storage along with the books in Kwangmyungsil all materials were transferred to the “Korean Studies Advancement Center” on April 2003. 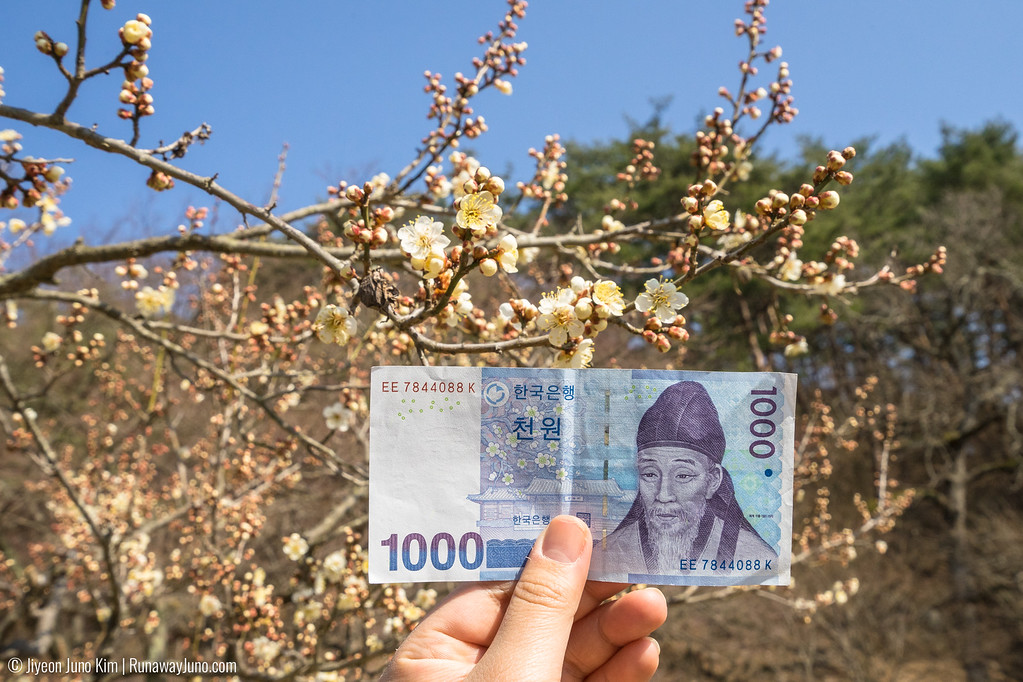 Maehwa flower is on the backside of the 1000 won banknote 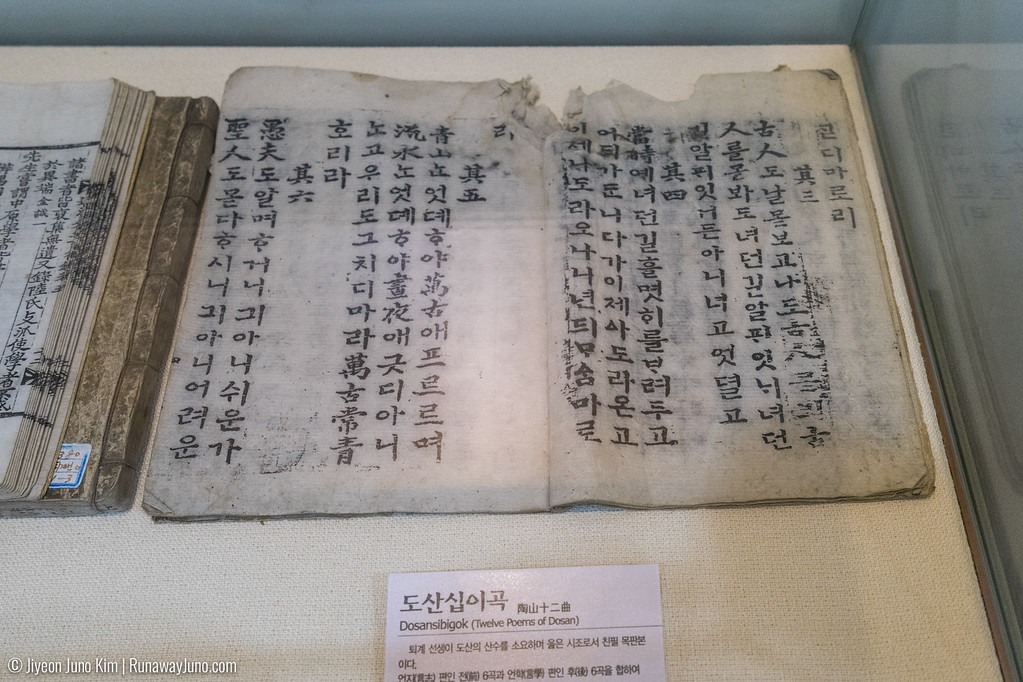 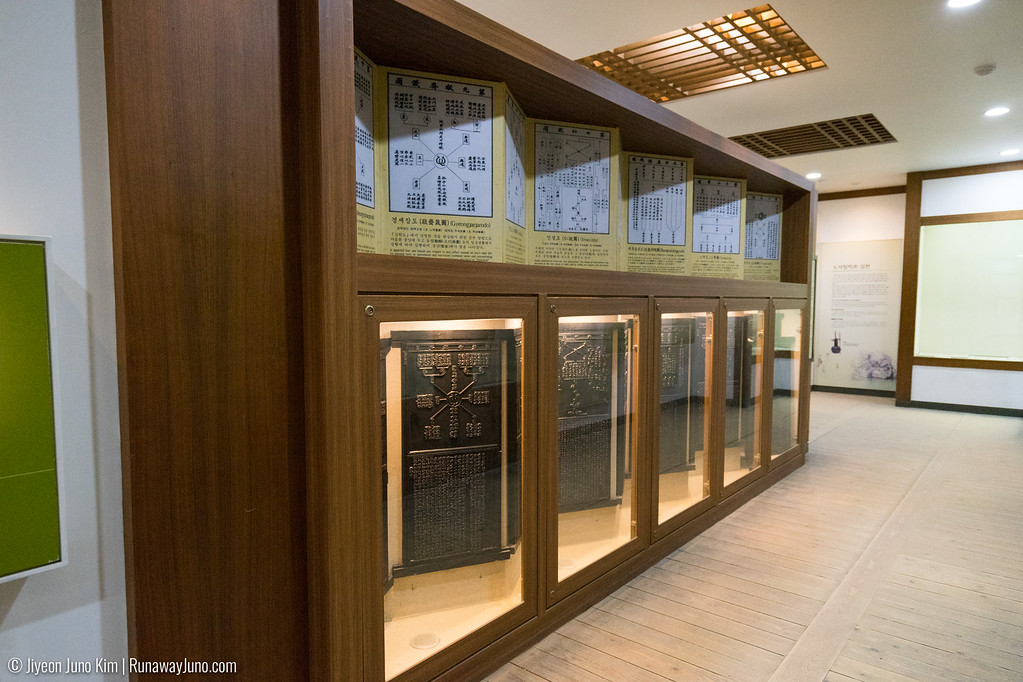 at Okjingak, completion of one book means gold and jade

More about Follow the Korean Tradition in Andong at